– The patients who are hypersensitive to any ingredients of this product.
– Patients who are receiving MAOIs (see Drug interaction section).
– Children under 4 years of age.

WARNINGS AND PRECAUTIONS FOR USE:

– Acetaminophen, chlorpheniramine and phenylephrine are all metabolized in the liver. Therefore, it is possile that metabolism of one or more of these product ingredients may be reduced in those with significant hepatic disease. It is suggested that liver function tests be monitored in this patient population. Dosage adjustments may be required, as drug accumulation or prolonged duration of action can occur in patients with hepatic dysfunction.
– This medicine should not be used in patients with closed-angle glaucoma. Increased intraocular pressure may occur from the anticholinergic actions of chlorpheniramine, precipitating an acute attack of glaucoma. In addition, the sympathomimetic actions of phenylephrine can also exacerbate closed-angle glaucoma.
– Do not take with any other acetaminophen-containing products. Do not take with other flu, cold or decongestant products. Immediate medical advice should be sought in the event of an overdose, even if patients feel well.

Special precaution and warning when using medication containing acetaminophen:
– The doctor must warn the patients about the symptoms of serious skin reactions including: Stevens-Johnson Syndrome (SJS), toxic epidermal necrolysis (TEN), or Lyell Syndrome, acute generalized exanthematous pustulosis (AGEP).
– Patients should stop using acetaminophen and seek physician immediately if rash or other symptoms of skin reaction or hypersensitivity reaction are seen during treatment. Patients with a history of such skin reactions should not take products containing acetaminophen.
– Sometimes, skin reactions including pruritic maculopapular rash and urticaria; other sensitivity reactions including laryngeal edema, angioedema and anaphylactid reactions may occur rarely. Thrombocytopenia, leukopenia and pancytopenia have been associated with the use of p-aminophenol derivatives, especially with prolonged administration of large doses. Neutropenia and thrombocytopenic purpura have been reported with acetaminophen use. Rarely, agranulocytosis has been reported in patients receiving acetaminophen.
– Concurrent use of many products containing acetaminophen, leading adverse effects (such as acetaminophen overdose).
– Acetaminophen should be used with caution in patients with preexisting anemia, hepatic failure, renal failure, alcoholism, chronic malnutrition or dehydration.
Phenylephrine hydrochloride:
– Carefully when using in patients with tracheobronchitis asthma, intestinal obstruction, hyperthyroidism situation, benign enlargement of the prostate. When using drugs show appear symptoms of irritation, dizziness, sleep disorder must be discontinued and inform to medical personnel.
Chlorpheniramine maleate:
– Because anti muscarinic effects need careful when using in patients with prostatic hypertrophy, blocked the urinary tract, blocked pyloric of duodenal, and exacerbated in patients who myasthenia gravis.
– The sedative effect of chlorpheniramine increased when drink alcohol and administered concurrently with other sedatives.
– At risk respiratory tract complications, respiratory insufficiency and apnea in patients with obstructive lung disease or in infants. To be careful in with chronic lung disease, shortness of breath or dyspnea, bronchial asthma.
– At risk cavities in patients treated long time, due to the antimuscarinic effect cause dry mouth.
– Using caution with the elderly (> 60 years) because these people are often hypersensitive to anti-muscarinic effects.
– Children are very sensitive to the side effects and may cause nerve stimulation should be careful when using chlorpheniramine for these patients, especially in children with a history of epilepsy.
This drug contains:
– Sorbitol and sucralose. Patients with rare hereditary problems of galactose intolerance, fructose intolerance or glucose-galactose malabsorption should not take this drug.
– Propylene glycol. May cause alcohol – like symptoms.
– Amaranth red and brilliant blue, which may cause allergic reactions.
This drug contains 19.5 mg sodium benzoate in each 10 ml which is equivalent to 1.95 mg/ml. Sodium benzoate may increase jaundice (yellowing of the skin and eyes) in newborn babies (up to 4 weeks old).

Pregnancy:
Only used for pregnant women if really necessary, with consideration about the harms caused by drugs. Not recommended for pregnant women last 3 months of gestation.
Lactation:
Must be very cautious when using the drug to breastfeeding, should considered or not authorize breastfeeding or not taking this product, depending on the needed level of medication for the mother.

EFFECTS ON ABILITY TO DRIVE AND OPERATE MACHINERY:

Be careful when driving or operating machinery.

Interactions:
– The speed of absorption of acetaminophen is reduced by cholestyramine. Therefore, the cholestyramine should not be taken within one hour if maximal analgesia is required.
– The speed of absorption of acetaminophen is increased by metoclopramide and domperidone. However, concurrent use need not be avoided.
– Chronic ingestion of large doses of acetaminophen has been reported to slightly potentiate the effects of coumarin and indanedione-derivative anticoagulants.
– The possibility of severe hypothermia should be kept in mind in patients receiving concomitant phenothiazine and antipyretic therapy (as paracetamol).
– Excessive intake of alcohol for long periods of time may increase the risk of acetaminophen induced hepatotoxicity.
– Anticonvulsants (including phenytoin, barbiturates, carbamazepine), isoniazid, antituberculars may increase the hepatotoxicity of acetaminophen.
– Probenecid may reduce the excretion of acetaminophen and increase the half-life in plasma of acetaminophen.
– Do not take this product when is taking a prescription of monoamine oxidase inhibitor (MAOI) (certain drugs for depression, psychiatric or emotional conditions, or parkinson’s disease), or for 2 weeks after stopping the MAOI drug. If you do not know if your child’s prescription drug contains an MAOI, ask a doctor or pharmacist before taking this product.
– Concomitant use of phenylephrine with other sympathomimetic amines can increase the risk of cardiovascular side effects.
– Phenylephrine may reduce the efficacy of beta-blocking drugs and antihypertensive drugs (including debrisoquine, guanethidine, reserpine, methyldopa). The risk of hypertension and other cardiovascular side effects may be increased.
– Tricyclic antidepressants (e.g. amitriptyline, imipramine): May increase the risk of cardiovascular side effects with phenylephrine.
– Concomitant use of phenylephrine with ergot alkaloids (ergotamine and methylsergide): Increase the risk of ergotism.
– Concomitant use of phenylephrine with digoxin: Increase the risk of irregular heartbeat or heart attack.
– Concomitant use of phenylephrine with atropine will block the reflex bradycardia that phenylephrine causes.
– Ethanol or hypnotics may increase the CNS inhibition effect of chlorpheniramine
– Chlorpheniramine inhibits phenytoin metabolism and can lead to phenytoin toxicity.
– CYP3A4 inhibitors such as: Dasatinib, Pramlintide increase the concentration or effect of chlorpheniramine.
– It reduces the effect of cholinesterase and betahistidin inhibitors.
Incompatibilities:
There is no study on drug incompatibilities. Do not mix this drug with other drugs

Acetaminophen:
Symptoms:
Acetaminophen toxicity may be due to a single toxic dose, or repeated large doses of acetaminophen (eg 7.5 – 10 g daily, for 1-2 days), or for long-term administration. Dose-related hepatic toxicity is the most severe acute toxicity resulting from overdosage and possibly death.
Nausea, vomiting and abdominal pain (normally settle within 24 hours of ingestion). After 24 hours symptoms may include right subcostal pain and tenderness, usually indicates development of hepatic necrosis. Liver damage is greatest 3-4 days after ingestion and may lead to encephalopathy, haemorrhage, hypoglycaemia, cerebral oedema and death.
Treatment:
Treatment is based on plasma concentration. Acetylcysteine protects the liver if administered within 24 hr after ingestion (most effective if given within 8 hours). Dose: 140 mg/kg orally (loading) followed by 70 mg/kg every 4 hours for 17 doses. Activated charcoal or gastric lavage may be treated to decrease absorption of acetaminophen.
Phenylephrine HCl:
Symptoms:
Phenylephrine overdosage lead to hypertension, headache, convulsions, cerebral haemorrhage, palpitation, systolic, paresthesia. Bradycardic often occurs soon.
Treatment:
Hypertension can be overcome by taking α-adrenergic blockers such as phentolamin 5-10 mg, intravenously; if necessary, repeatable. Hemodialysis is often not helpful. Attention to symptomatic treatment and general support, medical care.
Chlorpheniramine maleate:
Symptoms:
The estimated lethal dose of chlorpheniramine is 20 to 50 mg/kg body weight.
The symptoms and signs of overdosage include sedation, paradoxical stimulation of CNS, toxic psychosis, epilepsy, apnoea, convulsion, muscarinic effects, dystonic reactions, cardiac collapse and arrhythmia.
Treatment:
Symptomatic treatment and support of living function. Should monitor particularly to cardiac, respiratory, renal and hepatic functions, fluid and electrolyte balance.
Gastric lavage should be performed or emesis with ipecacuanha syrup. After that, activated charcoal and cathartics may be administered to reduce absorption of chlorpheniramine.
If hypotension and arrhythmia should be treated vigorously. Convulsion may be treated with intravenous diazepam or phenytoin. Haemoperfusion may be used in severe cases.

Pharmacotherapeutic group: Cough and cold preparations
ATC code: R05
Acetaminophen is the active metabolite of phenacetin, exhibits analgesic action by peripheral blockage of pain impulse generation. It produces antipyresis by inhibiting the hypothalamic heat-regulating centre. Acetaminophen is used to relieve pain and reduce fever, it may replace aspirin; however, acetaminophen is ineffectively used to treat inflammation. Acetaminophen has effects to relieve pain and fever about as well as aspirin after an equivalent dose. Acetaminophen reduces body temperature in fever patients but it rarely reduces body temperature in normal people. Acetaminophen has rarely effects on cardiovascular and respiratory system after an oral dose. It has no changes of acid-base balance, it does not cause irritation, stomach bleeding or erosion compared to use of aspirin or salicylate. The toxicity in overdosage with acetaminophen is thought to be the production of a metabolite, N-acetyl-p-benzoquinoneimine in the liver.
Phenylephrine hydrochloride has similar effect to α1-sympathetic activity which has direct effect on α1-adrenergic receptors causing vasoconstriction and increased blood pressure. Phenylephrine hydrochlorid cause reflex bradycardia, decreasing circulating blood volume and renal blood flow as well as blood flow to many tissues and organs.
The mechanism of action of phenylephrine on α-adrenergic is by inhibiting cAMP (cAMP: cyclic adenosin -3’, 5’-monophosphate) production via the inhibition of adenyl cyclase enzyme while the β-adrenergic action is by simulating adenyl cyclase activity.
When given in nasal mucous membrane, phenylephrine shrinks local blood vessel thus reducing nasal congestion and sinusitis caused by cold.
Chlorpheniramine maleate is a first-generation antihistamine. It competes with histamine for H1-receptor sites on effector cells in the gastrointestinal tract, blood vessels, and respiratory tract. Its sedative effects are relatively weak compared to other first-generation antihistamines.

Acetaminophen is readily absorbed from the gastrointestinal tract with peak plasma concentrations occurring about 30 to 60 minutes after oral dose. Acetaminophen is distributed into most body tissues. It crosses placenta and is present in breast milk. Plasma protein binding is negligible at usual therapeutic concentration but increases with increasing concentrations. The elimination half-time varies from about 1 to 3 hours. Acetaminophen is metabolised predominantly in the liver and excreted in the urine mainly as the glucuronide (about 60-80%) and sulfate (about 20-30%) conjugates. Less than 5% is excreted as unchanged acetaminophen. A minor (below 4%) metabolite is usually produced in very small amounts by cytochrom P450.
Phenylephrine hydrochloride is irregularly absorbed from the gastrointestinal tract and undergoes first-pass metabolism by monoamine oxidase in the gut and liver. It is almost entirely excreted in the urine.
Chlorpheniramine maleate is well absorbed after oral doses, and appears in plasma within 30 to 60 minutes. Peak plasma concentration is achieved within 2.5 to 6 hours after oral. Bioavailability is 25-50%. About 70% chlorpheniramine in the circulation is bound to plasma protein. Chlorpheniramine is rapidly and extensively metabolised, metabolites include desmethy-didesmethyl-clorphenamine, and some substances are unknown. Chlorpheniramine is mainly excreted in the urine as unchanged or metabolized form and in the faeces with a small amount. The half-life is 12-15 hours, and may range 280 to 330 hours in chronic renal impairment.

Storage: Store at temperature below 30oC, in a dry place, protect from light.
Shelf-life: 36 months from manufacturing date. Do not use after expiry date.
Specification of drug: Manufacturer’s 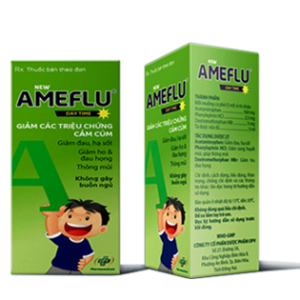 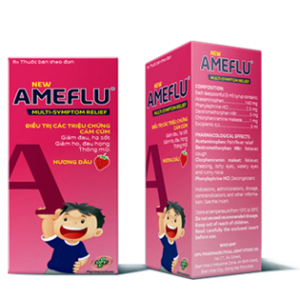 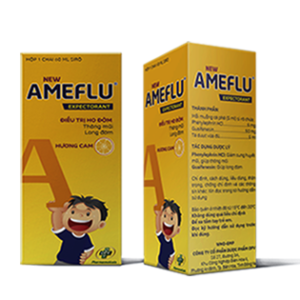 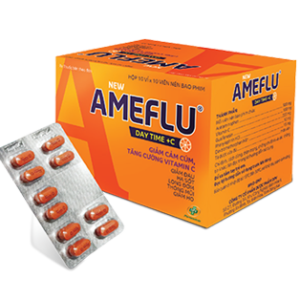 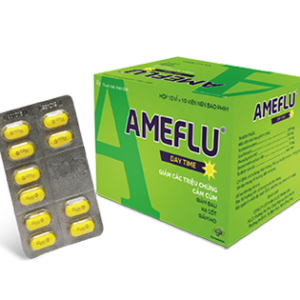 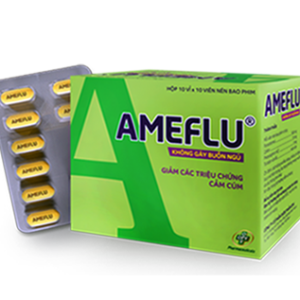 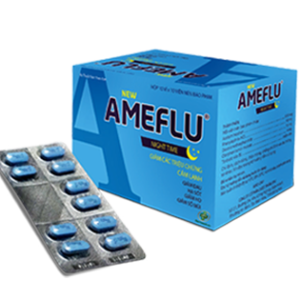